The Vanity Fair article we are all slicing thin and plating up on our own sites is genuinely packed with bizarre truths. I'd sorta been content to say, hey, the director shift resulted in a different perspective on largely the same corpus. That's not what happened at all. There's some ratfucking in there, and then Joss Whedon's head rises, like a bad moon, breaking the soup of algae laid over a brackish pond.

Comics aren't my primary interest. It's been fun to watch them exhume literally the only ones I know about, over and over, but I'm pretty normie on that stuff. Except it's hard to look at a billion dollar take on a movie and say that it's not normie shit. So maybe I'm still a dork, and the polarity of the content shifted. Nice to know I'm always, somehow instinctually, situated just outside the windowpane.

But… yeah. I'm not super crazy about Snyder's movies generally, I think they're better than people say they are but that doesn't necessarily make them good. Coverage of the films marks them as so universally poor that it's hard to know if I'm being primed to consent, vaccinated against their worst qualities. But foregoing his pay to make an unscreenable version of a movie considered a failure… it seems like a parable or something. Not a real thing, but a story we would make up to teach future generations an important lesson. I want to know what the lesson is. I also need it to come out fast while watching it is still kinda okay.

Because of some incredibly poor timing, I won't be able to make the stream this afternoon because I'll be doing something else for the site - specifically, the next episode of our Mage: The Ascension game "Animal House" for ClubPA! Like so:

The first episode of our #MageTheAscension Chronicle is now live on Club PA! Let us know what you think: https://t.co/QD9MnD6YCW pic.twitter.com/XvBZdEQkxZ

But Gabriel will hold down the fort on the channel during our typical 2-4pm slot, drawing a strip you wouldn't be able to see otherwise - the next ClubPA strip. It's about a letter he got in the mail. 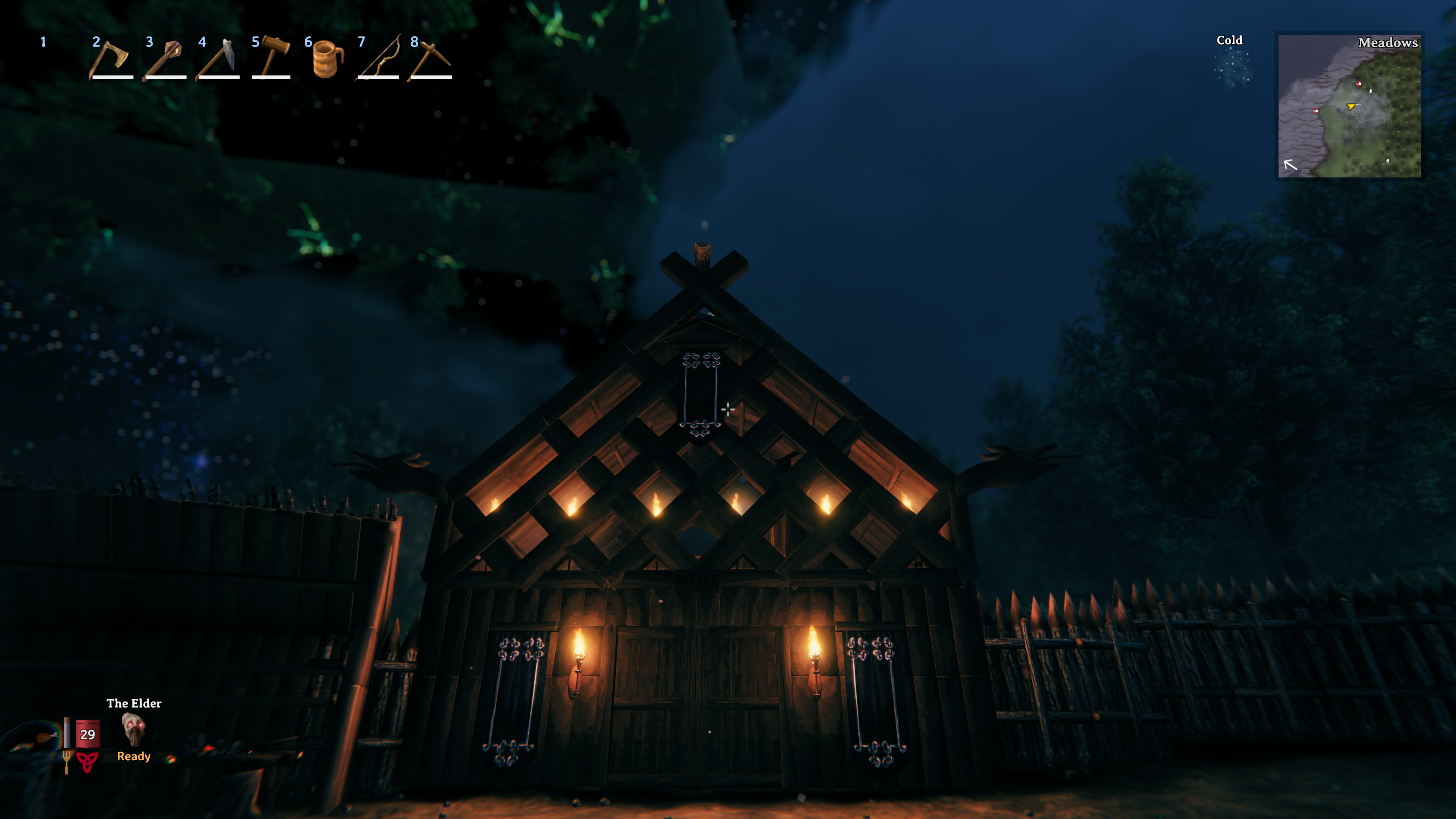 I'm not even saying this is hot shit.  I mean, I have access to the Reddit; I know what's up.  What I'm saying is that I don't make shit in games.  But I make things in this one.

(Oh, and yeah.  There's some lumber resting in that crook up top, like a jaunty cap.  It's very high up.  I'll get it later.)

Okay. So. Since the last time we talked on Monday, where I was like, "I guess Valheim sold a million copies this week," they just announced that they sold another million copies. You know, sometimes you look at the roadmap for an Early Access game you've bought, and you wonder if you're gonna see any of that stuff. I think we might actually see all that stuff. I can't imagine the pressure. Might be time to hire that sixth employee...?

We've consolidated in Vorkheim now, it's attached to the mystical portal nexus the boys invented. I have a sense of how they've put these together, I think it requires a lot of Eyeballs, but I've never actually done it myself. I've been way too busy sailing to the island east of us - let's call it Dvergrheim, because they definitely fucking live there - just to get the kinda bronze throughput we need to go after the Swamp. I understand it's bad. That definitely tracks with other Swamps, it's all there in the data. I just know they have iron there which I need to make an even more ridiculous mead hall than the one I already built. I have read that iron is also useful for making incredibly hard clothes but until I start dying a lot all iron is going directly into the Svartrafn and that's what's up.

A scourge greater than any other is the honking of deer. I feel like I've heard deer! I know what sounds they make. I don't know what sounds these deer are making. Obviously, putting a stop to the sound is a straightforward process. Well, sorta. For hoofed ruminants these beasts have certainly mastered the Serpentine. But they have a lot to say on a variety of topics and twenty hours in I feel like I've heard it. I'm familiar with their position on… rocks.

Eric (Edge Benson, Notorious EJB, etc.) from Acquisitions Intoxicated and I were playing on our own server for a while, clambering up the tech tree, until it became clear that it was way more fun to make a massive village together, venturing into the twilight woods to all strike a vein of copper at the same time. Your character is completely portable. Out of a concern for balance, you can't walk through teleporters with a lot of metals. It's okay to be mad at it but the main thing it does is emphasize the need for multiple functional settlements which I can't bring myself to hate. What you can do is go to another world for resources and bring them back. It's strange to think of the homestead we clawed out of the hostile earth as nothing more than spare parts but the thought is getting less strange by the hour.

I think the first time I ever saw "PS1, but as a vibe" was Due Process, a 5v5 tactical shooter I saw at PAX East a few years back. Valheim has got some hearty pixels, but then it has incredible light that shows them things off with incredible clarity. Depending on the time of day, these poofy gentlemen go from muted, impressionistic agents of color to crisp hyper-reality under a flash of lightning. It's just a pleasure to be there. To live there. To return to.

Mike, Kara, Noah, and myself don't really play the same game as Gabriel the Younger and his band of Teen Raiders, even though it's ostensibly the same server. I only see them when they return home for snacks and leave in their longboat. I suspect this dynamic is probably very common on Minecraft servers, groups with playstyles so divergent that they're functionally parallel, but because I never spent serious time becoming part of a server's culture I haven't really seen it. The one time I spent a few days on a Minecraft server my only act was harvesting just enough wood to make signs so I could establish canonical names for geological phenomena. All we care about in Valheim is making a beautiful place. We're informed through global announcements when the elder boys kill a boss I've never seen with my own eyes. They do this beyond the horizon, while we finish the road from Vorkheim to the old settlement. We stack the stones and wood neatly along the road in consideration of our future selves.

The publisher, Coffee Stain, has the kind of record now that makes me automatically interested in everything they put out. You can go back to the Sanctum games, or even Goat Simulator, but three times now - with Deep Rock Galactic, Satisfactory, and now Valheim - they've found gold in this co-op sandbox space that has got to be the most reliably gifted genre in history. A million sales were announced on February 10th, and three million sales on February 19th. They sold a million copies this week. The team, Iron Gate Studios, is like five fucking people.

Coffee Stain is also, apparently, trying to Hero a Might And Magic, via a game called Songs of Conquest whose trailer doesn't communicate much aside from the fact that I would buy whatever it is trying to sell.

I'll talk more about Valheim later, after I've played more. But I'd say that's the main takeaway - it's my intention to play a lot more, with more people.

The most important thing to discuss at this juncture is the strange polearm in Wednesday's strip, up in the attic:

When Mikhail was drawing the strip on the stream, talk turned - as it invariably does - to being hoist by one's own petard. There is a seemingly endless supply of petards, and hoists, and the interplay between them in this doomed era easily expands to fill the available hours. I recently made the following assertion in a post about the Snyder Cut:

"I'd never accept a task like this; it'd be like someone paying you to build an elaborate, multimillion dollar petard hoist designed explicitly to hoist your own petard."

I imagined that a petard was in some way related to a tabard, like the kind you wore with your guildies in Ironforge or wherever the vile and treacherous Horde cavorts. Obviously, there's a lot of excess fabric; it's easy to imagine the hook from a nearby hoist catching it in some way, even if you are just cranking it up yourself to get it ready for the next thing in need of elevation. Imagine it: you're winding like crazy, and then - bam! You're a couple feet off the ground. Hilarious! And a cautionary tale about indiscriminate cranking that has endured throughout the ages.

The device Gabriel has placed here in the foreground of the strip is a petard - to his thinking, a petard is something like a Guisarme, a hooked martial weapon whose long pole and curved blade might lend itself to a startling hoist. It's almost impossible to truly relate how wrong we both were.

As I learned from a reader after I revealed my ignorance in the post, "hoist with his own petard" means to have something blow up in your face. A petard is something like a breaching charge. It's not a pointy stick and it's not a WoW tabard. My favorite thing about it is that every one of these is completely different, and only one is correct, but we all knew what the phrase meant rhetorically. I've been delighted about it for days.

I'm not technically home, or even literally home.  I'm not home!  So I can't manage motorsports, which is a bummer because last week we got this shit back on track - truly locking in another year of our storied career with two cars in the points.  That said, I have every confidence you will find yourselves well served by the stream from ten or so on.